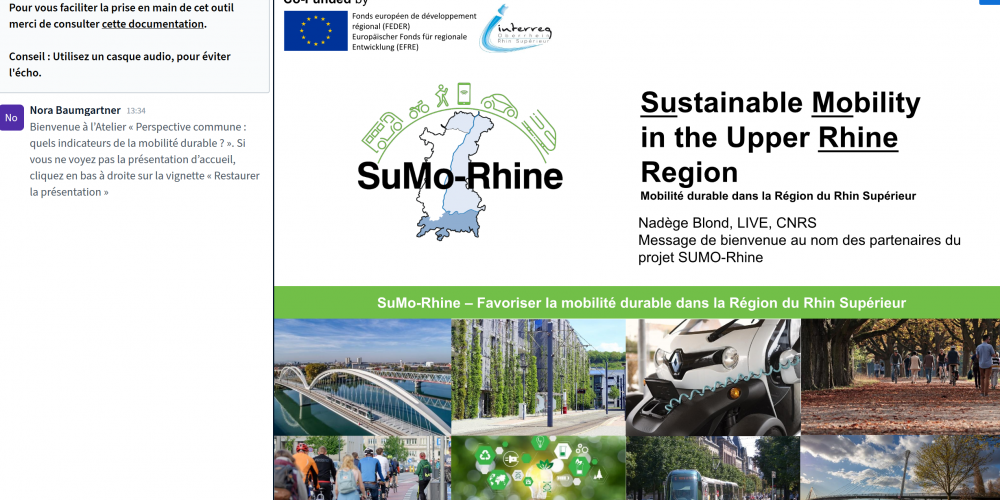 Collaborate and research despite the current circumstances. Keeping this idea in mind, the SuMo-Rhine project team hosted the first interactive online workshop titeld “Municipal perspectives: which indicators do we need for sustainable mobility?” on the 23rd of June. The workshop was conducted in French and aimed especially at French municipalities. The SuMo-Rhine team welcomed 10 participants from both side of the Rhine.

After a short reception and introduction by Nadège Blonde (CNRS), the project leader and head of the German-French Institute for environmental research (DFIU) at KIT Dr. Kira Schumacher gave an overview about the SuMo-Rhine project. Paul Salze (UNISTRA) continued with an introduction of the indicator system. In order to discuss the indicators, the participants were split into two groups. The first group started with the discussion about the indicators of the energy intense transportation modes while the second group discussed the indicators of the so-called soft transportation modes. After a short break, the subjects were exchanged between the groups.

After three hours the workshop came to an end. The SuMo-Rhine team would like to thank all participants for their active participation, which lead to interesting discussions and brought up new insights for the ongoing research.

View all posts by SuMo-Rhine →